Sona Van is an Armenian-American author who has authored 7 books of poetry that have, to date, been translated and published in 20 different languages around the world by the renowned authors and literary Icons of their respective nations.   These include English, French, Spanish, Russian, German, Farsi, Turkish, Greek, Bulgarian, Romanian, Serbian, Slovak, Georgian, Polish, Ukrainian, Arabic, Chinese, Indian (2 dialects), Kiswahili (Kenya). She has 3 books in Russian language, translated and critiqued by the most prominent Russian contemporary Poet Prize laurate’s Evgeniy Rain and Inna Lesnyanskaya as well as poet, translator, Mikhail Sinelnikov, known for his translations of Armenian classics.  Her works were published in numerous, prestigious literary magazines in Russia: «Orion», «Druzhba narodov (Fraternity of peoples), «Literaturnaya Gazeta» (Literary Newspaper), «Novy Mir» (New World), etc. Sona Van’s works had been critiqued by different literary authorities in numerous countries with 97 different articles. In 2017 Well respected Armenian Literary  critic David Gasparyan published 250 page monogram about Sona Van’s poetry,  titled “The Blazing Rose”. The book was presented in the National Library of Armenia, October 30, 2018.

Her last collections of the poems: «Libretto For The Desert» was presented։

Sona Van was the Editor/Publisher of «Եղիցի լույս» (Let There Be Light) cultural and literary monthly journal in Los Angeles, California.  Since 2006, she has been the co-founder and patron of «Նարցիս» (Narcis) cultural, art and literary journal which she has also been the editor of since 2013. Presently she is the co-founder of «Narcis TV» cultural program (Los Angeles, USA).

Sona Van, poet/essayist is an Armenian medical school graduate who later received a master’s degree in Clinical Psychology from the University of Santa Monica in USA.

She spent nearly fifteen years of her early career in Clinical Laboratory, later assisting  the pioneer AIDS researchers at Kaiser Hospital, Los Angeles. In 1991, with her husband, Dr. Noobar Janoian, Sona Van founded «All For Health, Health For All» a non-profit medical group which has grown to encompass fourteen different locations and Adult Day Health care facility called Sonafe, providing adult care and  free healthcare to the indigent population of Los Angeles and its surrounding communities.  She is also a sustaining member and contributor to one of the first Drug and Alcohol Rehabilitation centers in her native country, Armenia.  Despite her significant devotion to healthcare and mental health, nowadays, she is best known for, and most significantly involved in her literary career.

She is particularly revered in her homeland, having been awarded the Nation’s most prestigious honors bestowed upon a writer.  These include the Gold Medals  awarded by the Ministry of Culture and the Armenian Ministry of Diaspora; the gold medal from the Golden Apricot Film Festival and the highest Presidential Honor, the “Movses Khorenatsi Medal” for her contribution in preserving the Armenian identity abroad. Her local Glendale Chamber of Commerce recognized her with its “Woman in Literature” distinction in 2013.  In 2017, she was awarded Homer’s medal in poetry from the European Union and is also recipient of the International award of Clément Lanicius in Poland. Sona Van is also the co-founder and editor of, ‘Narcis’,  literary magazine in Armenia, since 2006. Sona Van’s latest book, Libretto for the Desert, dedicated to the centennial anniversary of the Armenian Genocide, has been acclaimed as one of the most significant modern works on the subject of this historical atrocity. The book has been acknowledged not only by readers and literary critics alike, but also by authorities dedicated to human rights, including U.S. Senator, Adam Schiff, writer, historian, academic, and human rights activist, Raul Ahuron, and Turkish writer, publisher, and political activist, Ragip Zarakolu, who, published this book’s Turkish translation in Turkey in 2016.  His publishing house has been subject to Turkey’s regressive Article 301 laws that broadly ban publishing of materials that insult the Turkish Republic.  The publishing house “Belge” was attacked by Turkish police and the copies of ”Libretto For The Desert “ were sized among other books.

Sona Van’s work beckons dialogue.   As such, she is considered to be the most widely discussed contemporary Armenian author by literary critics in Armenia and abroad.  Sona Van lives in US with her family since 1978. 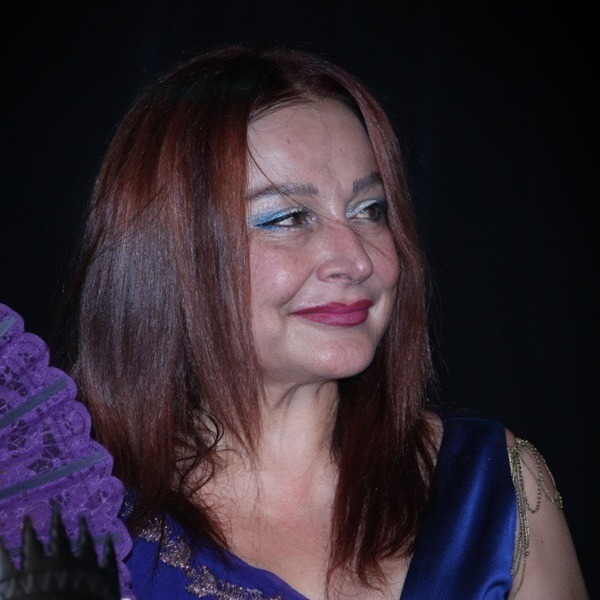 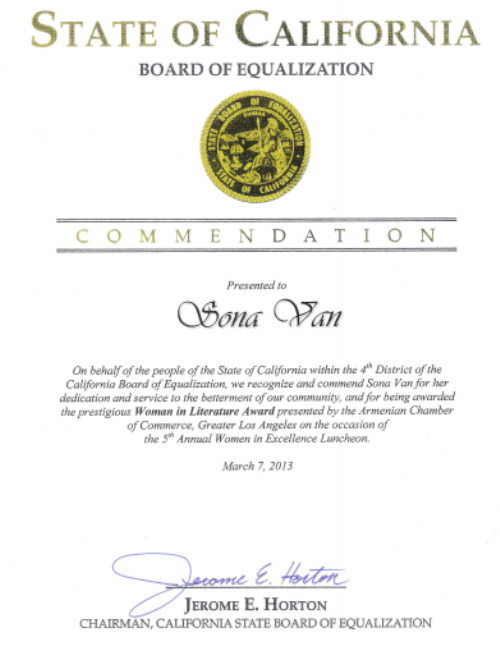 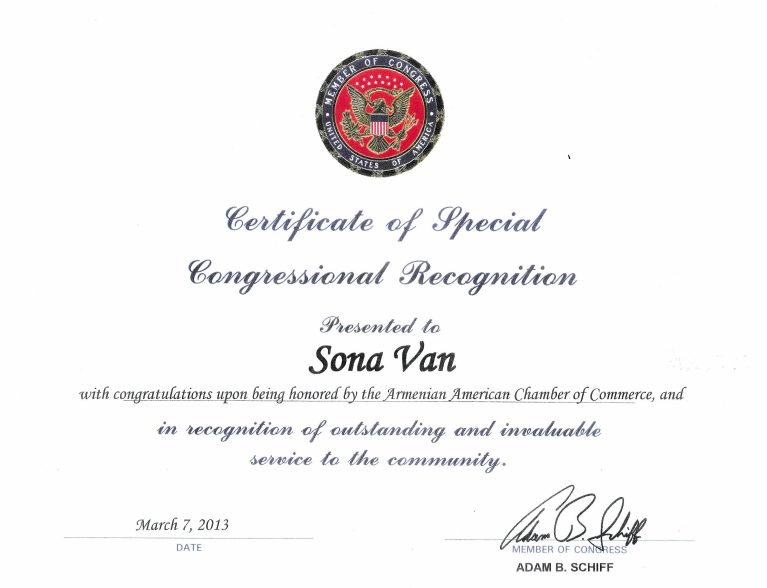 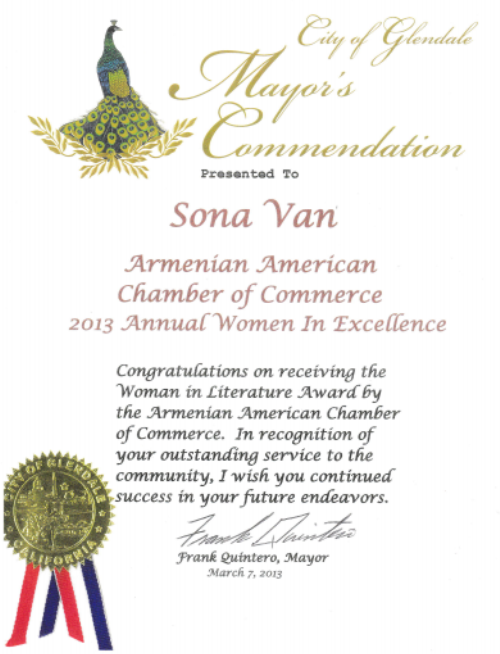 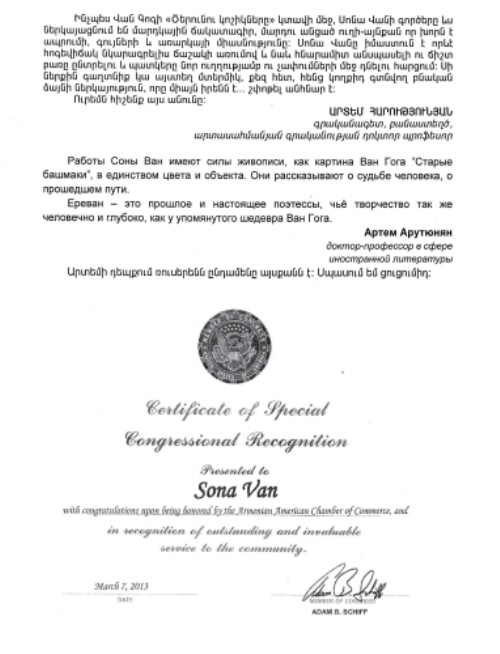 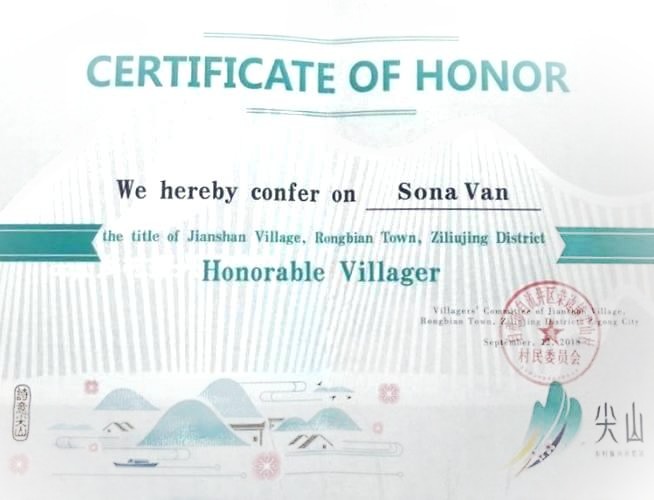 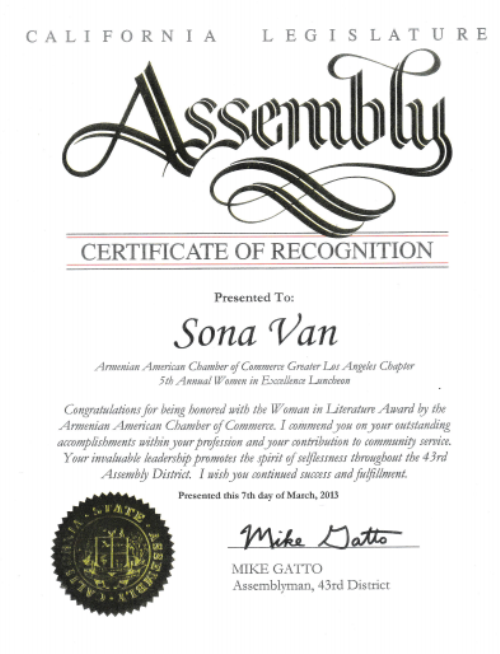 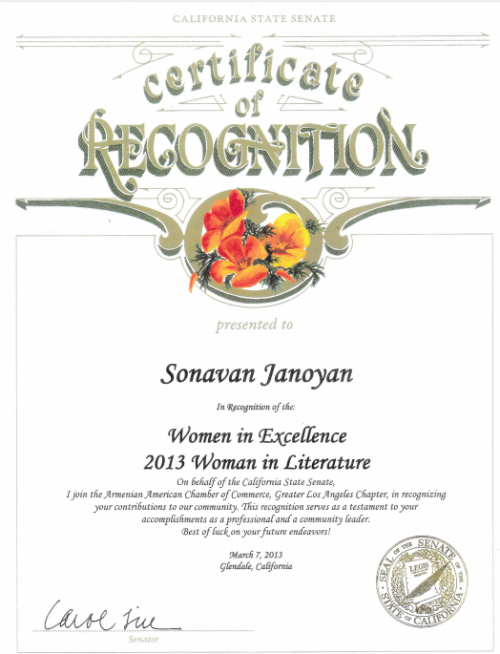 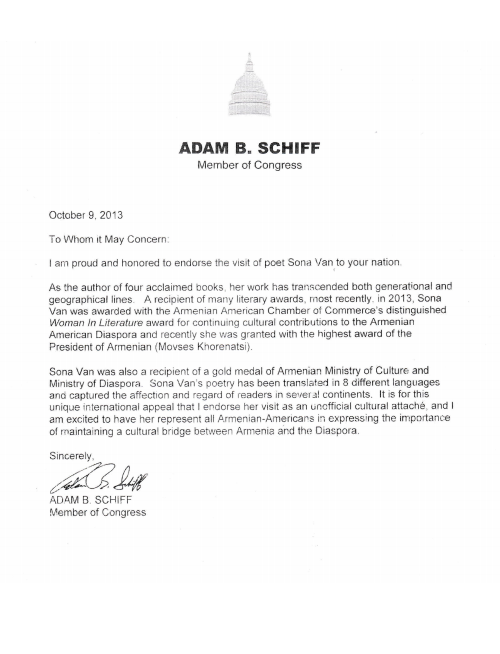 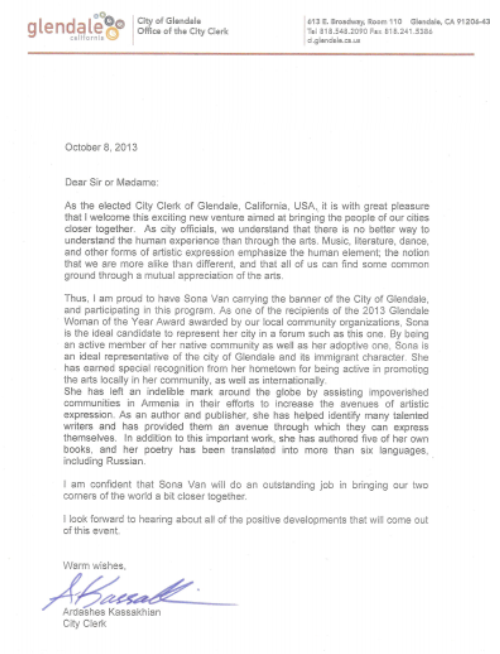 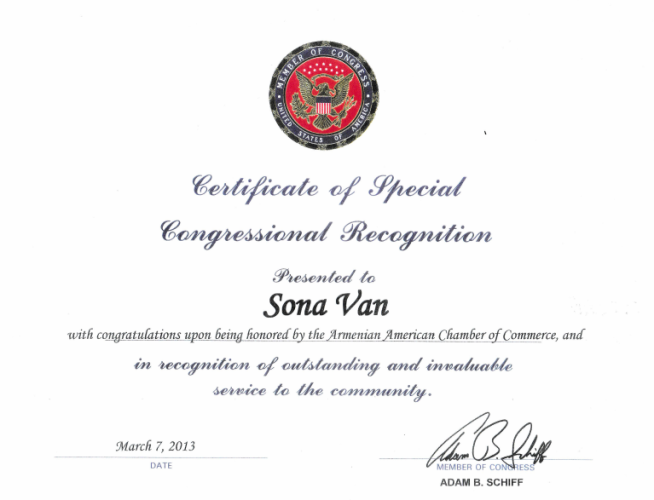 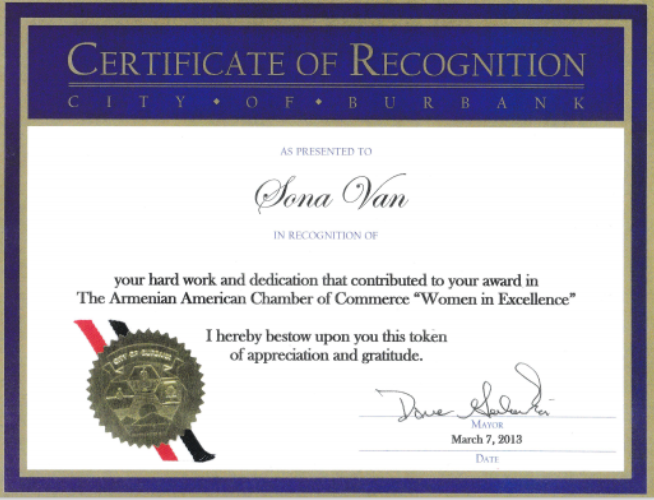 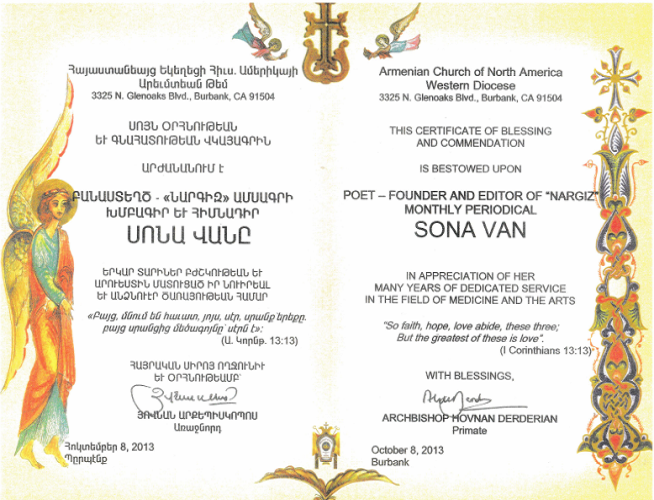