ABOUT THE “SPIDER”-WOVEN VISION (AND MUCH MORE)

ABOUT THE “SPIDER”-WOVEN VISION
(AND MUCH MORE)

“Life is doomed without the collision of tradition and innovation.”—Herbert Read

Inspired by the visual imagery of Sona Van’s poem “I Am the Eight-Legged Eternal Spider” (which appears in this issue of Noyan Tapan) from her latest volume of poetry A Bird Called Chara (2010), as well as influenced by the poet’s free, allegorical thinking, I wrote this “book-length” essay from a film director’s perspective using the poem and its brilliantly montaged “shots” as my focal point. In taking this episode, I have tried to highlight the impact of the material unity of pathos and enchanting power in the artistic word (I have only tried . . .).

The Mystery of “Beads Falling from the Pearl Rosary”

“The very first poem in Sona Van’s latest volume, “I Am the Eight-Legged Eternal Spider,” an extremely emotional piece for Armenians that refers to the Great Catastrophe, reverberated in my heart with an instantaneous force, transporting me into the unknown, an Edenic world of which we the living have heard but never seen, with a vision of a blazing sphere, all-encompassing like the sun, emanating the seven rainbow rays of light:

And at that moment I saw an image more unusual than anything else—beads falling from the pearl rosary with gold thread strung around the one and only God’s universe (the tasbih that our forefathers held in their hands for centuries, uttering the words ‘bliss,’ ‘curse,’ ‘God’ . . .), through the light of the ancient Armenian lyra (as I envisioned it), underneath entrancing sounds of sacred hymns, guided by the Muse Erato,* one of the “sisters of Parnassus,” and angels, calmly falling like snow flakes and lining up with a soldierly discipline in front of the poet, arranging themselves in the order of “the God-given alphabet of the Azkanazian nation and of the land of Armenia.” The light intensified after that moment and in the reflection of the specter, at the apex of the artistic process, the sacred beads like heavenly manna transformed into poetic lines, which with the guidance of the mysterious emissaries, who had descended with a mission to inspire the vatic process of the poet, ascended and disappeared into the infinity of the sky.

“And here the vision ended. But it continued on the conscious level of my imaginary through intuitive thinking that these newly created poetic lines, blessed by God, will thrice take their place in the UNIVERSAL GOLDEN ALMANAC of artistic works created by man under the protection of the Highest Patron.”

Lessons from a Classic—For Those Who Need Them

Let us return to the real world of Sona Van’s poetry, where the optimistically peaceful and bucolic life is full of “roses” and where the sounds of “war” are deafened with a sheet of rose petals. Noyan Tapan continues to publish the works of this prominent representative of verslibre, whose new series of poems distinguish themselves through their deep philosophico-psychological metaphors and meanings contained in single-word lines.

It is perhaps right to mention in this context that Van’s verses are sometimes pleasantly difficult to digest, which might produce different erroneous opinions about the work. The lines that I am citing below from Silva Kaputikyan can serve as a point of clarification and a lesson on how to read Van’s poetry.

In her response to Van’s literary success, Kaputikyan’s evaluation in its theoretical commentary and heart-felt wishes shows a healthy understanding of cultural development activated through a modernist language with its figurations of new collocations. The words of the talented and prolific Kaputikyan are also an astute response to those who depreciate and object to art that is free from clichés and who have deluded ideas about innovative thinking. Kaputikyan’s words, at the same time, are a literary commandment to the new generation of poets, who can learn from the modern stylistics, the unusually and minimally structured images in Van’s poetry. Addressing her fellow poet in 2003, Kaputikyan congratulates Van on the publication of a new volume of poetry:

Our poetic handwriting, our poetics, the approaches to art and literature are different, but that doesn’t deter me from appreciating your poetry, the freshness of your style, uniqueness, your distinctive perceptions of the divine. Your “God / is my upstairs / neighbor / I / often knock on His door / and ask . . . for an onion / sometimes He helps me / sometimes He doesn’t.”**  Your charming feminine “audacity” helps me to deeply think and appreciate your meditative state and your undeniable writing ability. I congratulate you on the publication of the volume I Don’t Have a Name and its success and I wish that you find a nourishing literary atmosphere in the Diaspora, which will allow you to fully realize your divine gifts.

* It is worth mentioning here that there was a queen named Erato in the Armenian antiquity, who, according to Hayk Khachatryan’s The History of Rulers, “among 141 kings, was the only ruler who was crowned thrice (8 BC — 11 AD). Following the customs of the era, she was named after one of Apollo’s Nine Muses—Erato—the muse of love songs. When the queen was asked whether she had experienced the kind of love that was worthy of her name, she answered ‘No,’ adding, ‘My duties as ruler left me with no time for love. I appeared to the world and to the people as Erato, a woman, but I bore the weight of seven kings on my shoulders.’”

** This poem was published in NoyanTapan, Issue 38. 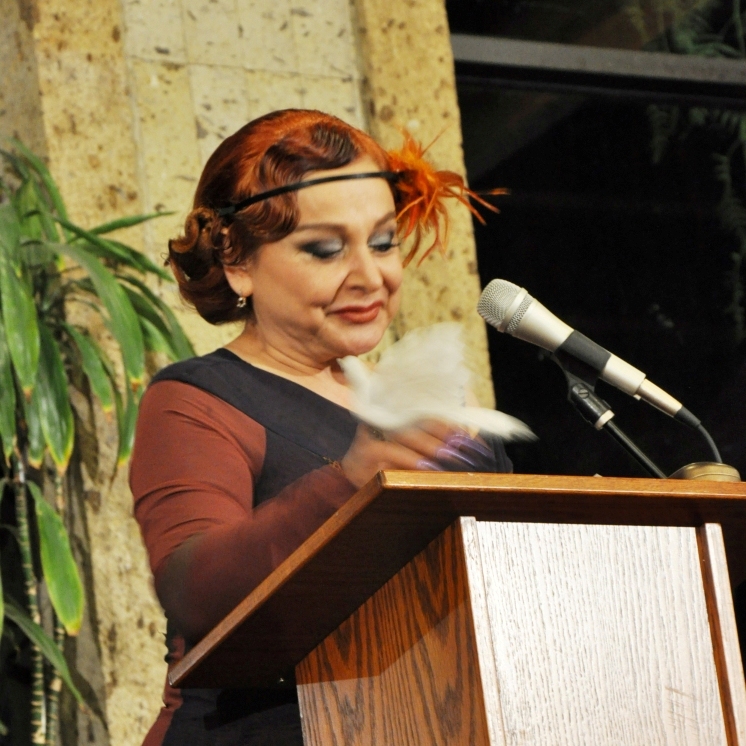