On December 2, 2015, the collection of poems “Libretto for the Desert” by Sona Van, exclusively dedicated to the 100th anniversary of the Armenian Genocide, was presented at the Hayartun Center of the Armenian Diocese in Georgia. The author of many collections of poems, Armenian American poet, whose works are translated into dozens of languages, attended the event.

Sona Van is already prominent in the Georgian public, her poetry collections in professional translation of poetess and translator Anahit Bostanjyan, poetess Makvala Gonashvili, poet and translator Givi Shakhnazari have been presented to the Georgian reader and are appreciated highly.

The creative evening began with video based on the book “Libretto for the Desert”, featuring Honorary Worker of Art of Armenian Republic, reciter Silva Yuzbashian. She sincerely voiced resentment and anger of a young woman killed on the road to Der Zor, who mourned brutally murdered million and a half Armenians.

Poetess and translator Anahit Bostanjyan in her remarks spoke about the career of talented poet Sona Van. Sona Van’s poetry, written in perfect Armenian, in feminine, elegant and emotional manner embodies universal human values. Her works penetrate the soul; they capture the reader and lead him to the divine and sublime, to victory and beauty, to the good and dazzling. As Anahit Bostanjyan emphasized in her statement there is much pathos and power in Sona Van’s poems.

General Director of the Golden Apricot Yerevan International Film Festival, Harutyun Khachatryan was in attendance of the creative evening. The famous film director reflected upon Sona Van’s poetry that represents love, the beauty of the soul, the glorification of man, it can enrich the reader and make him a heavenly being of created by God and human inhabited poetry.

Sona Van expressed her gratitude to the Primate of the Armenian Diocese in Georgia and the “Hayartun” Center’s administration for provided support. She also expressed her admiration for St. Movses Khorenatsi Kindergarten and the display of Gayane Khachaturyan artworks in the hall.

The poetess spoke about the collection of poems “Libretto for the Desert” and social anxiety factors in face of terrorism. She interpreted this horrifying disaster as a struggle between limited intelligence and creative talent, formed personal creed that can be defeated only by the power of poetry and arts.

Very Rev. Father Khoren Hovhannisyan, Pastor of Kvemo Kartli region at the Armenian Diocese in Georgia, in his closing remarks transmitted to the people present the blessing from the Primate of the Armenian Diocese in Georgia. Father Khoren compared Sona Van’s creative evening to the preaching of perception of the world by means of poetry: Virgin Mary mourns the loss of her Son, Sona Van in her poems protests against war and murders. God did not create Evil, the sixth commandment is «Thou shalt not kill”. This is a common theme in many of her poems.

Silva Yuzbashyan, who had arrived in Tbilisi with the poetess, recited Sona Van’s works. The works from recently published and translated by Yevgeni Rein Russian collection of poems by Sona Van were also recited. 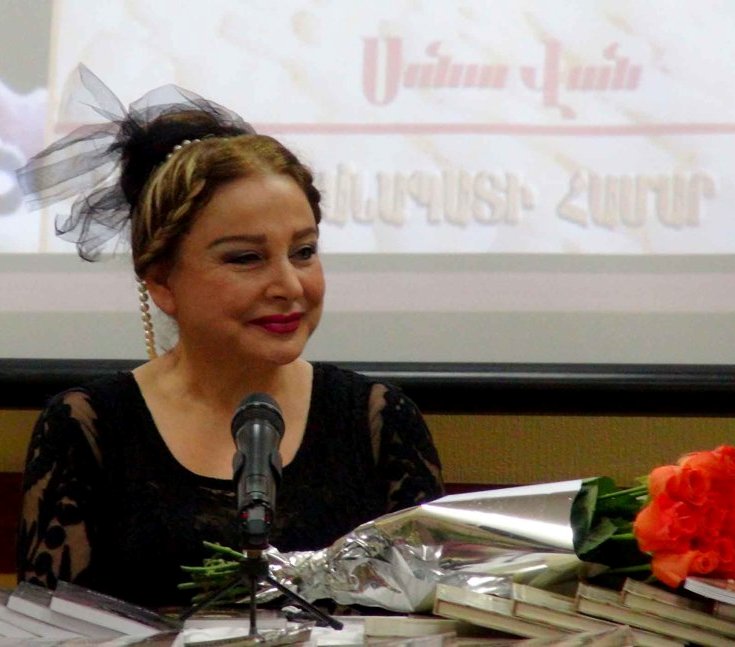