Armenian poet Sona Van has been awarded a «Movses Khorenatsi» medal by the President of the Republic of Armenia Serzh Sargsyan for her contributions to preserving the Armenian identity. On December 6, 2013 the poet was invited to the Consulate General of Armenia in Los Angeles, where Consul General Sergey Sarkisov handed her the award.

He greeted Sona Van’s initiative to publish the collection of poems dedicated to the centennial commemoration of the Armenian Genocide in seven different languages. She expressed her gratitude for the high reward and added that it is a great honor and responsibility to be acknowledged on the state level for preserving the Armenian identity; a mission that she has presumed through her art. Sona Van remarked that language is the base for a nation and a state, its preservation is a sacred duty. She also presented her collections of poems to the Consul General.

Sona Van (Ter-Hovhannisian) was born in Yerevan. She is a doctor by profession, and has lived in California since 1978. She has received a Master’s degree in the USA in the field of clinical and spiritual psychology.  She has authored four poetic collections that have been translated into many languages. She has been awarded with gold medals from the Ministry of Culture of RA and from the Ministry of Diaspora of RA as well as many other literary and cultural prizes.

She has been publishing the «Narcis» cultural magazine since 2006 sponsored by her husband Nubar Janoyan, and is also the cofounder and the sponsor of the «Tsolker» cultural youth magazine in conjunction with the Writers Union. In 2013 the Armenian American Chamber of Commerce awarded her with the «Woman in literature» prize during the annual «Women in Excellence» event. 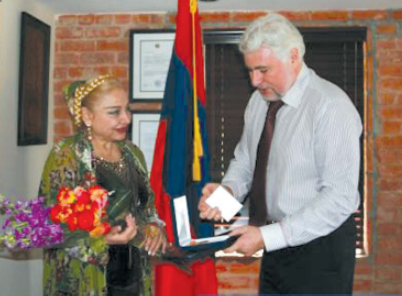